What a weekend of rolling storms! Some of us were very lucky and some were not. I hope you were in the former group. The winds in my area created havoc – I suspect there were some twisters by the damage I observed driving home through my regular back roads on Saturday afternoon. I was grateful for an alternate, albeit longer route home as the helpful SES turned us back. They were out clearing the road where multiple trees had fallen taking the power lines with them. The SES provide such a great service to the community. Thank you SES 🙏

On arriving home I was relieved to see that there was no property or garden damage except for lots of debris that swirled from my trees across my deck and only a five hour power outage.  So very lucky!

We trust and appreciate that you will understand and continue to support your regular farmers who were hit by hail on Saturday. There might be some slightly damaged leafy greens for the next few weeks but they will still be as tasty as always.
Being resilient, the farmers and their crops will bounce back in time.

Beautiful flowers always lift our spirits so I am delighted that Cathryn from our Platypus Point Flowers stall still has a few of her yellow proteas – they are nearing the end of their flowering at her Mt Burrell property – so let’s enjoy them while we can. Cathryn’s red kangaroo paw and NSW Christmas bush will be her main floral offering during the coming weeks.

Did you know that the petals of the NSW Christmas bush are not the brightest and most beautiful part of this plant, the vibrancy comes from the sepals? In this respect they are similar to the bougainvillea and poinsettia. The sepals enlarge after flowering starting with subtle pink and white colours that become bright and bold, finally turning a stunning scarlet red just before Christmas. When cut, their pretty scarlet blooms are surprisingly long lasting – up to three weeks! So I have read.

Griffith Uni /MFM Research Project
The research being conducted by Griffith Uni is continuing with an online questionnaire only. If you haven’t had a face-to-face interview we would appreciate you taking up the online option. 🙏 The aim of the research is to determine the beliefs, attitudes and perceptions of consumers attending the Murwillumbah Farmers’ Market. Thank you. 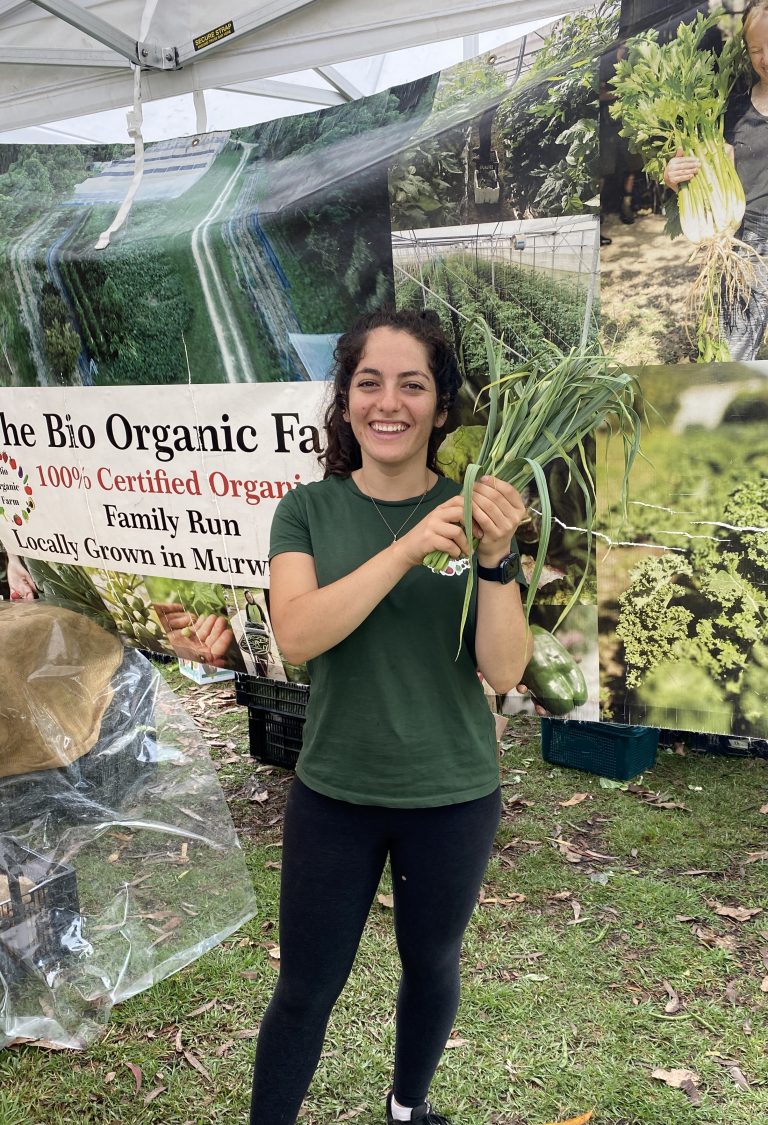 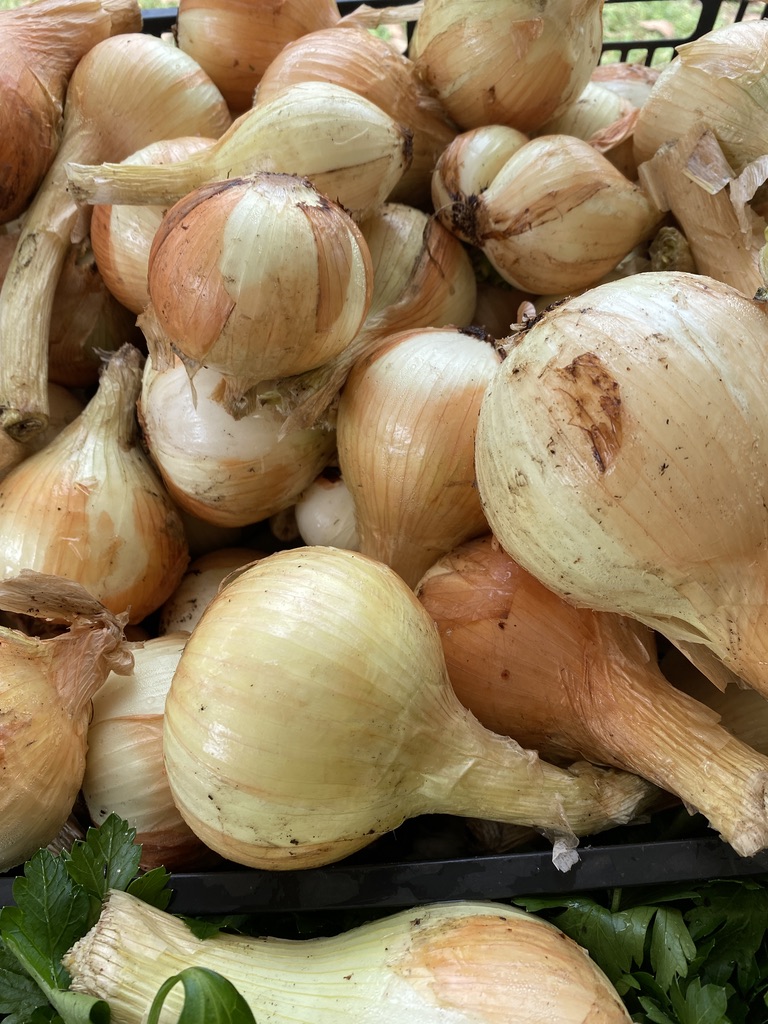 Being harvested now are new season bulb onions easily identified as they still have a little of their stem attached. They are so mild, moist (and low on tear inducing pyruvic acid ) that they only need to be lightly cooked so don’t overcook them. Eating these delightfully fresh onions makes me realise how ordinary old season onions are. What a seasonal treat!

Actually the term onion is a general term that refers to a whole group of vegies that we can divide into two groups – the round bulb type – red, yellow and white onions and tender elongated bunching onions – scallions and the smaller shallots. And of course we have lots of these too, as well as early season garlic scapes (see the photo of Daniella) at The Bio Organic Farm.

Fascinating Fact:  Onions are one of the oldest foods around and there is evidence that the ancient Egyptians cultivated the bulbs to eat AND to use when burying their dead (they thought the shape and concentric layers represented eternal life).

On the other hand the ancient Greeks thought they improved physical fitness and in the Middle Ages they were given as gifts or money.

Health tip: More than two millennia ago Greek doctors and Roman writers recommended eating some raw onion daily – on bread and on an empty stomach to prevent and cure a host of afflictions. In fact although apples are good for you the old saying may originally have been “an onion a day keeps the doctor away!”

For those of you who love a new way to enjoy an old favourite I have included a simple but delicious recipe for Miso Butter Onions. It only has three ingredients! So easy.

Click here for the link to register for the full weekly market newsletter. It will pop into your inbox each Monday between 1.00- 3.00pm. It is so simple 👏

🧀A little about Nimbin Valley Dairy and a creamy broccoli soup recipe.