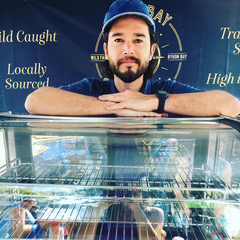 This week we are welcoming back The Bay Smokehouse.

Founder Damien Curtis, who brought his smoked rillettes to our market for short time in 2017, returns with The Bay Smokehouse’s seasonal range of local wild caught smoked fish, smoked over Aussie hardwoods in the Byron Bay hinterland.

Damien’s love of smoked fish started at an early age, growing up in France and England, where smoked mackerel and salmon were a

household staple. Based in Paris, often eating out in restaurants with his parents, he also soon developed a love of gourmet food and fine dining. At university, Damien studied World Religions, with a focus on Indigenous cultures, after which he proceeded to work in Indigenous community-based nature conservation with various organisations in Europe, Africa and South America. He later undertook a master’s degree in Environment and Development from Cambridge University.

In 2007, Damien met his partner Sinem Saban, who was a teacher in remote communities in Northeast Arnhem Land, in Australia’s remote Northern Territory. They went on to become award-winning documentary filmmakers together and produced various campaigns on Indigenous rights in Australia.It was in Arnhem Land, hunting with the Yolngu peoples, that Damien first experienced mullet cooked over the smoking embers of a campfire, and he was hooked. Upon returning to their home in Byron Bay, Northern NSW, Damien would go spearfishing nearly every day to catch mullet and tailor. Soon he began smoking them in small metal boxes to recreate that primal wood-smoked taste. This also took him back to his early days eating smoked fish in Europe. In 2017, Damien spotted an opportunity. Whilst everybody in Australia loves their smoked salmon (farmed in Tasmania) nobody had turned their attention to the plentiful and under-utilised local fish species that were just as oily and delicious smoked. And thus began The Bay Smokehouse.  Since its launch in early 2017, the business has picked up a suite of awards, including Silver at the Australian Food Awards for their Smoked Mullet, and Gold two years running for their Smoked Fish Rillettes. These are a delicious blend of their wild smoked fish combined with raw organic cashew cream and possibly a few secrets. The seasonal fish at the moment is Tailor, which is at the end of its winter run. Damien assures me that it is simply delicious served as you would smoked salmon. 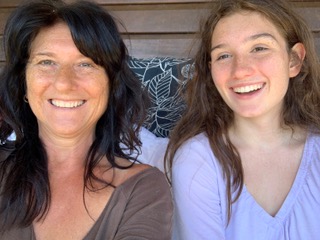 THIS WEEK we also welcome Alaya Body to the market too. Alaya Body products is a local business established by Kate Tepana (shown below with her daughter Claudia) who grows the hemp and the calendula that she uses in her products. More details about Kate, her background and her products next week. But the important characteristic of all her products is that they are good for your skin – they feed and nourish the skin and do not contain any nasties – absolutely none – no emulsifiers, no preservatives, no synthetics, no colours, no artificial fragrances – just mother nature! How good is that! 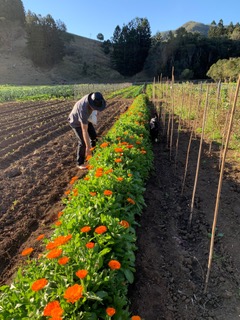 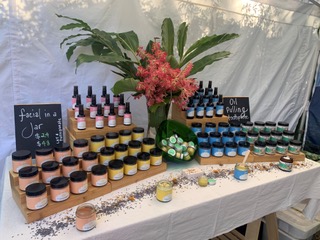 What is GREAT at the market?

We tried for our school holiday fun planned for the June/July holidays with Jester J but the wheels fell off as he lives on the WRONG side of the border – only a smidgen – at Coolie sadly. So what are we doing now?

But what the heck … bring along your children, grandchildren, nieces and nephews and because the market always has a great vibe and Mighty Max – our musician always brings bucket loads of fun and laughter especially when gets his limbo on.

We have huge amounts of delicious fresh seasonal produce as always plus cheeses of all descriptions and foods to enjoy while you linger and relax at the market. And there is so much more!


Click here for this week’s market newsletter. Better still have it delivered to your in-box every Monday between 1.00-3.00pm. Simply refresh this page then complete the pink box on the RHS of this page.

The good oils and a sneak peak.

A perfect autumn day for our market this week 🌞