Mangoes have arrived? Local mangoes are always a little behind the ones grown further north due to the climate variation. However Rainbow Fruit Flats has both Bowen and R2E2 mangoes now. 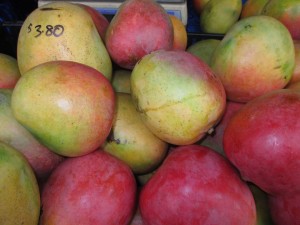 Bob and Kate are returning with finger limes this week. They had planned on coming last week but the wet weather prevented them from picking them. Look for the quaint canary yellow ute next to the market manager’s stand. The rain also prevented blueberries from being picked but they will be at the market this week.

Sugar cane juice commenced last week. Visit Tracey and Pierre at their stall opposite where Chai Harem usually is placed. They use a generator so they are in an area where the noise is away from where everyone sits to enjoy social moments and our music.

Simply Divine Cupcakes – Vishnu is refining the art of croissant production and they are proving to be very popular. Take a peak at the Plain Croissants and the Pain Au Chocolate.

Blueberries are back and will continue for the next few weeks.

Chai Harem are away for this week only.

Nudgel Nuts – Ian is AT the market  on 21st January but then he is away for two weeks returning on 11th.  He has advised that the 11th might be his last week as he is running out of nuts. The 2015 harvest commences early in March so we are very fortunate that it won’t be a big gap before our favourite nut stall is back.

the young ones entertained this week with her very quirky humour.

Music by Emma Whines – a young sixteen year old local talent who relieved Tamara on 7th when she was unwell is returning.

Emma who has a beautiful voice will be studying at the Queensland Conservatorium. Come and enjoy her debut market.

Guy Kachel is in Tamworth at the Country Music Festival so will return to the market in February.

Coming soon  – Dragon fruit in the next week or two.

In mid to late February we should see grapes, new season Royal Gala apples AND pears at the market!